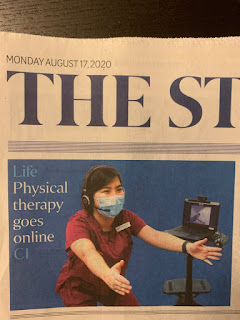 Those who come to our clinics know that this is definitely not the physiotherapy we do in our clinics. Maybe that's why the general public thinks physiotherapy is all about patients learning how to do rehab exercises.

Quote by a hospital physiotherapist "its tele-consultation service is offered to patients with stable medical conditions where exercise therapy is the main source of treatment and also to those who are on track with recovery".

We assess and we treat you, mostly with our hands. Manual therapy. Nothing like what is written in the Straits Times article today. 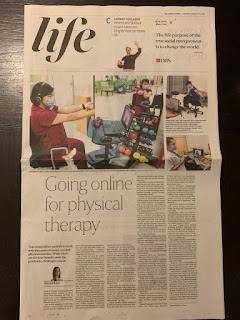 Today's Sunday Times on page A10 highlighted two incidents where a personal trainer and a Yoga instructor got into trouble after touching their clients inappropriately. Gino has previously written about this before, you can read it here.

We are so fortunate that we do not face such issues when we work with our patients since we cannot be totally sure if we don't assess them.

We definitely will never take for granted that our patients give us consent to touch them when we assess and treat them. Again, Gino has written about this before.

All our patients deserve and need gentle and thoughtful treatment. So our human touch is really important as we can diagnose, comfort and treat our patients.

We will endeavour to be very careful with our touch since we want to convey gentleness, compassion as were treat and heal them. Thank you for your trust in us.
Posted by Aized Noor at 4:34 PM No comments: 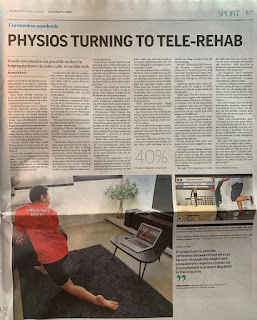 Reggie (left in the picture) in today's Straits Times on online/ video consultations during the circuit breaker period.

It's under the Sports section on page B21. Go take a look.

Call us if you need any advice/ suggestions regarding your condition.
Posted by Aized Noor at 10:00 AM No comments:

Physiotherapy In The Forum Page 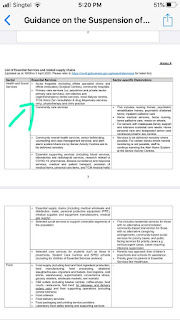 The President of the Singapore Physiotherapy Association wrote in to the forum page of today's Straits Times on page B10.

Since many countries are similarly on restricted movement orders or lock downs, you can read from this article that physiotherapy is on the 'essential' list in Australia.

We definitely do understand that the government is trying to bring the number of transmissions down. Our clinics are still here for you for online/ video consultations.

Stay safe everyone and stay at home.
Posted by Aized Noor at 5:11 PM No comments: 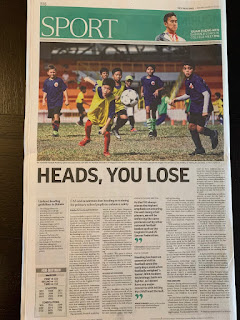 We wrote about how heading the ball in young children may damage their nerve cells in February 2020. Now The Football Association of Singapore has adopted similar guidelines for children under twelve.

It's on the last page of the Straits times today under the sports section on page B18. Go take a look.

You saw it here first.
Posted by Aized Noor at 10:01 AM No comments:

Email ThisBlogThis!Share to TwitterShare to FacebookShare to Pinterest
Labels: Heading football bad for your brain, Kids under 12 ban from heading during training, Straits Times article on 090320

Heading In Football Damages Nerve Cells In The Brain? 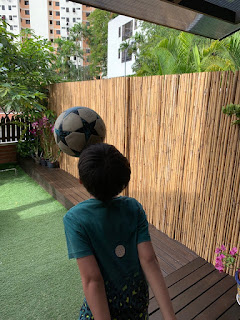 If your child is playing football (or soccer), please be aware that too much heading may be detrimental. This news headline caught my eye as my boys go to football training on most Tuesdays.

The British Football Association has just recommended a few days ago that children 11 and under in England, Scotland and Northern Island will not be allowed to head soccer balls training. Limits for older children will also be put in place.They will however be able to head the ball in matches/ games.

This ban on heading is already put in place in America  by the United States Soccer Federation back in 2017 for children 10 and under. They also limited heading for children aged 11 to 13 to not more than 30 minutes a week.

Although there is still no strong evidence to suggest that heading the ball is to blame, these new guidelines will be introduced to lessen any potential risks ensuring that football remains as safe as possible.

A single header or two is unlikely to cause any significant damage, but repeated headers over an extended period may lead to problems.

There needs to be much more research to understand fully all factors that can contribute to the increased risk of degenerative brain disease in footballers. Until then it is wise to reduce exposure to the current recognized risk.

Email ThisBlogThis!Share to TwitterShare to FacebookShare to Pinterest
Labels: Heading football bad for your brain, Kids under 11 ban from heading during training, Parkinson's disease

Reggie has been helping out with Team Singapore's rugby teams since 2015 when the SEA Games was held in Singapore.

At the last SEA Games in 2017, he travelled with the Seven's Team to Kuala Lumpur and the team came back with the silver medal.

Let's hope they come back with the gold medal this time.

You can read about Reggie being quoted in today's Straits Times on page C9 under the Sports section.
Posted by Aized Noor at 8:46 AM No comments: