Hamstrung By Your Hamstrings? 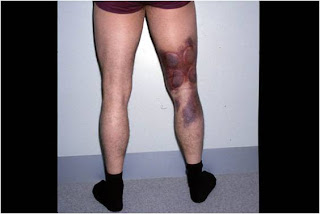 How many of you have had hamstring problems? Published data shows that hamstring strains are very common in sprinting, kicking and movements involving sudden accelerations. The data also shows that hamstring strains are the most common injury in Australian Rules football, American football and soccer. An increasing number though are soccer players. How about Steven Gerrard and Fernando Torres as two recent examples? Remember Michael Owen used to be a casualty as well.

In our clinic, we've been seeing an increasing number of patients with hamstring pain. In fact, count me in, I've had a few while I was competing as well. One was caused by a new bike, another was when I was doing the last 200m sprint at the end of an interval session. Hamstring strains usually cause a fair amount of time off training and competition. And a lot of frustration as a result, trust me, I can testify to that. Hence, today's posting of how to prevent straining or pulling your hamstrings.

Arnason and colleagues (2008) studied professional soccer players over four seasons and found that what was most effective was eccentric strength training together with flexibility (or stretching) training in reducing hamstring strains. They did not state what their flexibility program was although we do know from other research what that usually consists of (Please see "Does stretching improve Performance"  for more details). Just as important as well, there was no improvement from doing flexibility training alone. Basically that means even if you can stretch til the cows come home, you will not be able to prevent straining your hamstrings.

Although the article involve soccer players, it will definitely apply to all sports just as well. Meaning if you want to find out more on how to prevent hamstring strains, our physiotherapists will be more than happy to show you how.