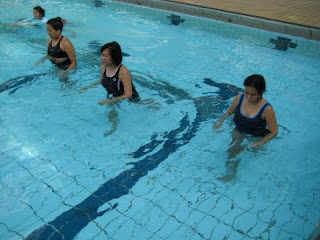 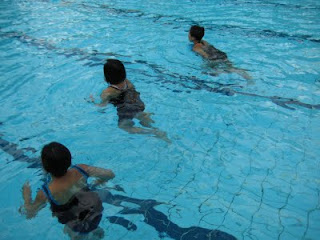 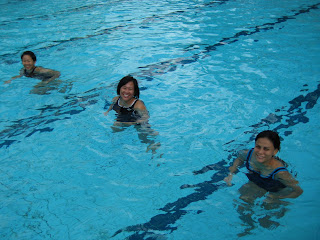 Gone are the days when women aren't suppose to exercise when they are expecting. There is a great deal more research supporting the fact that exercise is just as important and even beneficial during pregnancy as at other times.

Just ask Paula Radcliffe (women's world marathon record holder at 2:15.25 hrs). In her 6th month of pregnancy she did a London 10km race in Hyde Park in 42 mins. She was still running about 70 miles a week in her 7th month. Her doctor told her that even while pregnant, exercise is better for her baby than no exercise, but he advised her to keep her heart rate below 80% of maximum. Well, she's Paula after all you'll say.

How about Aized? She's currently about 5 months pregnant. Aized's doctor advised her (I was at the check up with her) not to exceed 150 beats per minute (which is also about 80% or her maximum heart rate) for more than 15 minutes.

Based on research up until 2002, current American College of Obstetrics and Gynecologists (ACOG) guidelines recommend only 30 minutes of exercise per day for pregnant women.

However, this recent study suggests that current guidelines can be increased. The authors in the study mentioned below critically evaluated recent studies regarding the effect of exercise during a healthy pregnancy on mother, fetus and child outcomes. Based on this review, healthy pregnant women can benefit from exercising at a moderate intensity for a longer duration than recommended in the current ACOG guidelines that are based on studies published before or during 2002.

Well, you've read earlier what Paula did. What does Aized do? She does deep water running (in photos above with other patients) for up to 50 minutes twice a week . Come join our hydrotherapy/ deep water running class especially if you're pregnant and still keen on exercising. Please call for details.

Kalisiak B and Spitznagle T (2009). What Effect Does An Exercise Program For Healthy Pregnant Women Have On The Mother, Fetus And Child. The Journal Of Injury, Function, And Rehabilitation. 1(3): 261-266
Posted by Aized Noor at 4:06 PM

Email ThisBlogThis!Share to TwitterShare to FacebookShare to Pinterest
Labels: Pregnancy and exercise