You May Not Need That ACL Operation 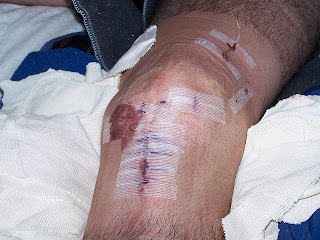 Here is another follow up to our current trends in anterior cruciate ligament (ACL) reconstruction management which started a while ago. This one seems to be the best one yet, especially if you're considering whether to do the operation or not.

You may NOT need surgery after all. Please read on to find out more.

An article by Swedish physiotherapist/ researcher and colleagues (Frobell et al, 2010) made headlines when it was published back in 2010. Allow me to give you a little info on Frobell. While working as a physiotherapist back in 2001 rehabilitating ACL injuries and also assisting at ACL surgeries (to better understand the procedure), he was inspired to find out more. In one particular case, a patient's ruptured ACL had partially healed and attached to the posterior cruciate ligament or (PCL) and the knee was stable and did not require surgery. This led him to investigate further which brought about the following study.

The researchers reported that 60% of all ACL reconstructions could be avoided in favour of correct advanced rehabilitation. Their results made waves all over the world and were of course met with healthy skepticism (including yours truly). Many nay sayers said it could not be done. It was even agreed that their results will probably not hold up in the long term.

Surprise surprise, the same researchers have published a 5 year follow-up study that confirms the results from the earlier study. More importantly, the results also show that the risk of osteoarthritis and meniscus injuries (requiring surgery) is not higher than those treated with physiotherapy alone.

The patients also did not experience any difference in function, activity level, quality of life, pain, symptoms etc. The researchers reported that there wasn't any difference in any outcome between patients that were operated soon after injury, operated on later and those who did not have any operation at all.

Take home message from the researchers? Young, active patients with ACL injuries may be better off doing specialized rehabilitation initially rather than getting an ACL reconstruction.

Well, I guess the key here if you want to avoid surgery is specialized rehabilitation with experienced physiotherapists as mentioned by the researchers. Come talk to us if you have any questions, we have much experience with ACL injuries and we do aqua based rehabilitation as well.

The researchers are now starting their third part of the study, Knee ACL Non-operative treatment (KANON) whereby they follow-up on the patients 10 years after their ACL injury. I will be waiting for their results.

*Picture from flickr.com
Posted by Aized Noor at 11:05 PM