It is suggested by David Butler that having a tattoo may alter the representation in the brain, which then leads to altered motor output (or performance).

Have a look at at the recent "Ashes"tour when the favored Australians lost to the Poms (the English) on home ground which hasn't happened in almost 25 years. Two particular players stand out both for their tattoos and their poor and inconsistent performances especially after getting their tattoos.

Vice captain and batsman Michael Clarke (on the left) has a number of tattoos (including LB, which are initials of an ex girlfriend) and his performance as listed below. 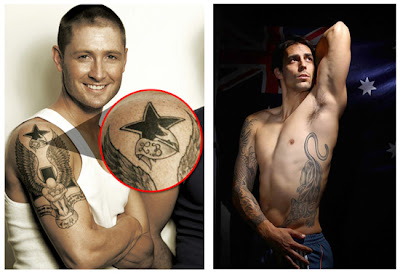 Fast bowler Mitchell Johnson's has a "sleeve" on his right arm and a fairly large abdominal tattoo (right picture). Noticed his runs increased (ie performance worsened) after the tattoo. 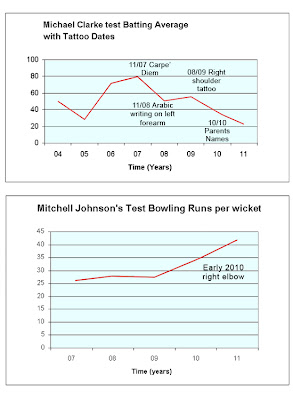 Tattoos usually hurt and thus have great representation (in the sensory homunculus) in the brain. Large tattoos may take weeks to finish and the owner of the tattoo may have altered thoughts and emotions with regards to the tattooed limb. Proud, excited, maybe a little shy or ashamed later. The limb is thus embodied differently in the brain thereafter too.

The change in the homunculus may be minor but for these high performance athletes dealing with a super fast 150km per hour cricket ball, it can be critical.

*Pictures and notes from noigroup.com