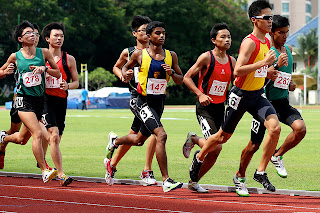 I came across this link that outlined a poster presentation abstract that was presented recently at the 2013 Annual Meeting of the American Academy of Orthopaedic Surgeons (AAOS). With the new trend towards barefoot/ minimalist running shoes, the researchers were trying to evaluate whether foot strike would change in adolescent runners (since they do not have a permanently established gait) when they changed running shoes or running speed.

They studied a small group of 12 experienced adolescent runners (from local track teams) and found that different running shoes "dramatically" altered their biomechanics and may thus diminish performance.

The study seems to show that simply by changing the adolescent's footwear, their foot strike would change.

Well, something for all parents and coaches of young runners to think about. Please also have a look at this http://weloverunning.blogspot.sg/2012/09/best-shoes-for-your-kids.html.


*Picture of 2013 National Schools Track and Field Championships by richseow on Flickr.com
Posted by Aized Noor at 10:54 PM